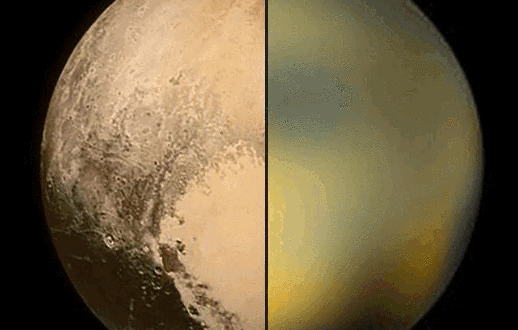 For years Pluto was more of a distant notion than a real thing. It’s like your friend whose always working on that novel: you know he’s working on it, but if you ask him to describe he gets flustered and defensive.

That’s now NASA scientists have been since 1930, when Pluto was discovered. But unlike your friend’s novel, NASA engineers actually did something about it and now we have crystal clear images of Pluto.

Just take a look at the difference between Hubble’s best picture of Pluto and the New Horizons’ photo received last week:

The increased resolution isn’t all that we’ve learned about Pluto. In fact we’ve learned so much that it has changed our view of how planets are supposed to form in a solar system. These are some of the awesome new things we’ve learned from observing Pluto:

1. Pluto has an Atmosphere.

Pluto was thought to be a dead world discarded into the outer planets during the early formation of the solar system. All the cool things that inner planets have: atmospheres, hydrocarbons, warmth….we expected Pluto to be a kind of colder version of the Moon.

As New Horizons sailed past Pluto, it took this image of the Sun being eclipsed by Pluto. Besides being the first time any living creature has seen Pluto in this light (we hope…), the picture revealed not one, but two distinct layers of haze reaching up to 80 miles above the planet’s surface.

Earth’s atmosphere, for comparison, reaches up to 300 miles above the Earth’s surface.

It’s nitrogen ice flows, not water ice, which would’ve have been mind-blowing. But the nitrogen ice flows aren’t bad either. They point to a geologically active planet, which is again something NASA scientists didn’t think was possible.

Celestial bodies with no atmosphere get pummelled by craters all the time. Mercrury and the Moon are good examples. But even Mars has a crater-filled surface. Even Earth, with its thick, asteroid-destroying atmosphere has a few craters.
This means that the surface has been resurfacing itself in a fairly rapidly fashion. The famous ‘Sputnik Planum’, the large area on the surface is estimated to be 100 million years old. Now that sounds old…but that makes it younger than the Appalachian mountains.

In other words, it’s geologically active…and we have no idea how that’s possible.

4. Pluto Is Slowly Losing Its Atmosphere (that we just discovered was there)

Hey Pluto! You have an atmosphere…oh wait, there it goes.

The solar wind is slowly taking away Pluto’s atmosphere, although it won’t be completely disappearing anytime soon. The New Horizons spacecraft detected nitrogen ions, which is similar to what is currently happening to both Mars and Venus (we have our magnetic field to protect us from solar wind). 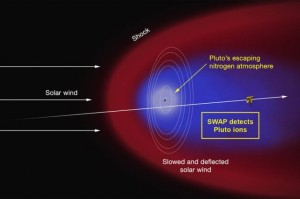 The New Horizons spacecraft detected a massive collection of carbon monoxide deep within the Sputnik Planum. The readings indicate that the concentration of frozen carbon monoxide gets more even more concentrated when you go under the surface.

What does this mean? No one knows for sure. My theory? Aliens live under the surface and melt the frozen carbon monoxide and convert it into oxygen and water.

6. Pluto is Bigger Than We Thought

Size was never the reason that Pluto was declassified as a planet (it’s the elliptical orbit that crosses over other planets). But we’ve never had an accurate idea of how big Pluto actually was. Pluto’s surface created mirage effects on our instruments. Potentially that haze we just discovered was the main reason behind these faulty readings. But our estimates were off, and it’s actually quite larger than we thought. Here’s Pluto superimposed on Australia:

charon geologically active new horizons pluto 2015-07-28
Matthew K. Black
Previous The Tango Between Venus and Earth Puts All Your Dance Marathons to Shame…
Next Saturn’s Rings Are Much More Massive Than We Thought

Powered by WordPress | Designed by Tielabs
© Copyright 2022, All Rights Reserved